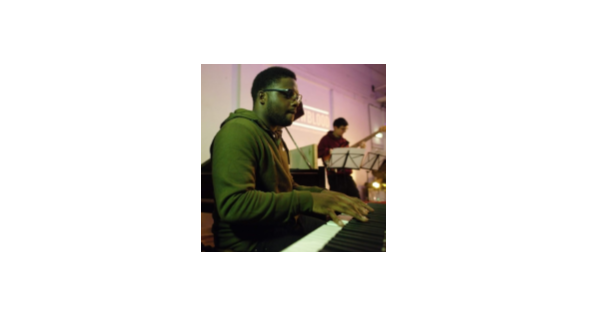 Deschanel Gordon a former student of Mossbourne Community Academy (MCA) in Hackney, has won the biennial BBC Young Jazz Musician competition, which was televised on BBC4 on November 22. Deschanel was a student at Mossbourne from 2009-2016, including two years in the 6th Form, before studying music for four years at Trinity Laban conservatoire. He has already established a growing reputation as a professional jazz pianist, having played with the Seed Ensemble, the Trish Clowes Quintet and bands led by Mark Kavuma… as well as heading up his own trio.

Competing against two young sax players, a guitarist and a double bassist, Deschanel played a 15-minute set, which included a Kenny Garrett piece ‘Haynes Here’ and one of his own compositions, ‘Awaiting’, both accompanied by Nikki Yeoh’s group, Infinitum. His concluded with a solo version of the Thelonius Monk classic, ‘Round Midnight’. The judges were three renowned figures from the UK jazz scene, Guy Barker, Orphy Robinson and Nubya Garcia. Guy Barker said of his performance, ‘I loved the fact that round every corner there was a surprise’, while jazz vibraphonist, Orphy Robinson, appreciated his ‘variety of tone colours, so many twists and turns… his performance was so exciting for me.’

Deschanel’s talent on the piano was spotted early, while he was at primary school, and his mother took him to group piano lessons, where he mainly played classical music. He also played piano in church. ‘Reflecting their Jamaican origins, my mother listened to gospel music at home and Dad played a lot of reggae’, Deschanel explains. ‘I was also aware of soul and rock music, but I took to jazz at an early age. I think I discovered what jazz was at about 10 years old. I was watching TV and there was this wonderful pianist playing… and it turned out to be Oscar Peterson!’

Deschanel regards himself as mainly self-taught but at the age of 10 he had the opportunity for some free piano lessons by a local musician, Chris Wilson, as a result of being spotted at a summer school. Entering MCA at the age of 11 he was particularly encouraged by former music teacher, Sarah Denton. At MCA the jazz pianist, Steve Lodder, became his piano teacher and he was also given the chance to learn the saxophone. This was the instrument he mainly played during the three years he attended the Saturday schools run by renowned jazz musician and teacher, Julien Joseph. But eventually he opted for the piano as his main instrument.

Outside school Deschanel also played for several years as part of the Hackney Creative Jazz ensemble, led by Jerry Hunt and Justin Pickett. ‘During this period I really benefitted from meeting and hearing some of the UK’s best jazz players, such as Tony Kofi, Byron Wallen and Trevor Wattkiss… an experience which continued at Trinity Laban,’ Deschanel explains. Asked who his major influences are in the wider history of jazz, Deschanel unhesitatingly cites Herbie Hancock, Chick Corea and the lesser know Mulgrew Miller, who played with the Art Blakey bands… and who was, in turn, a mentor to his one of his own personal influences, Julien Joseph.

During the coronavirus lockdown, Deschanel has been rehearsing hard for the Jazz Awards competition and composing some of his own music. He has also been learning pieces by Bach: ‘I have always wished I had more of a classical education and playing Bach is giving me other ways to approach improvisation that I hadn’t previously considered,’ he explains.